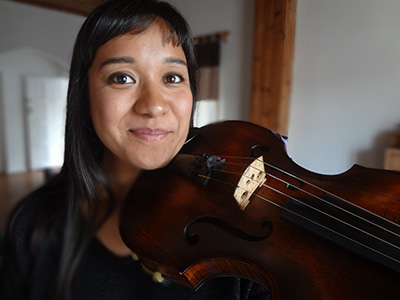 Azra Isaacs joined the CPO in 2009, having completed her B Mus in 2008.  She went on to complete her Master’s degree in 2014, and received both with distinction under the direction of Farida Bacharova at UCT. While studying for her first degree, she was placed on the Dean’s Merit List each year and in her final year received the Alfred Libochowitz Prize for viola.

With the CPO, she says, she has had the privilege of sharing the stage with a number of world-renowned soloists such as Sarah Chang, Joshua Bell, and Shlomo Mintz, plus she toured to the US, UK and Mauritius.

National Chamber Competition with the Rustenburg String Quartet,  and was awarded best individual player each of her three times!

She played as a soloist with the CPO in the Artscape Youth Music Festival in 2006 and has received masterclasses from Chris Roeland, Daniel Rowland, Susan du Bois, Loise Lansdowne and Suzanne Martens.  Azra plays a 2006 viola made by Oleg Alekseev.

Under normal circumstances, subscriptions are available through
Artscape Dial-A-Seat on 021 421 7695 or
Computicket online or by calling 086 1915 8000