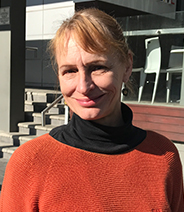 For the last ten years, violist Renette Swart has been freelancing … and now she is back home.  After completing her B Mus Performance Degree in both piano and viola at the University of Stellenbosch, with a CAPAB bursary, she joined the CAPAB Orchestra as co-principal Viola. Seven years later, in 1993,  she joined the CTSO as sub-principal viola, moving in the merger to the CTPO in 1997. She joined the CPO in 2004 before deciding to go freelance. “I am very happy to once again be part of the orchestra family,” she says. Apart from her passion for music, Renette also has a passion for animals