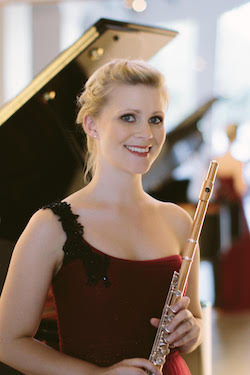 Sally Minter, sub-principal flute from October 2018, is a UCT graduate who studied under the tutelage of Bridget Rennie-Salonen, then obtained an MA with merit from the Royal Academy of Music in London where she studied with Paul Edmund-Davies.

While at UCT, Sally won several scholarships and prizes, including the class medal for three consecutive years. She has performed as a soloist with all the major orchestras in South Africa and won the FMR Award in 2011.  As the runner-up in the prestigious SAMRO Overseas Scholarship Competition in 2016, Sally was able to attend a flute summer school in Italy under Hansgeorg Schmeiser in 2018 and had lessons in London with Michael Cox.

Sally has played as an ad-hoc musician with the CPO and also in the Cape Town Festival Orchestra, the Eastern Cape Philharmonic and the Free State Symphony Orchestra.  While in the UK, she performed with the Royal Academy orchestra under the baton of conductors such as  Marin Alsop and Semyon Bychkov.

The duo released its debut album “Avanti Live in Concert” in 2018, available online or as a CD from their website www.avantiduo.com