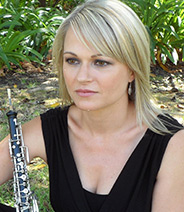 While at the music centre, she conducted the Junior Wind Band, co-ordinated the Centre’s Silversands Primary School Development Project, which is one of five development projects at the Music Centre and taught recorder, oboe and bassoon,  in four of the other Development Projects. She was founder member and manager of the Adopt-a-Muzo Project, which raises funds for financially needy talented young musicians at the Centre to further their careers. Three of her Adopt-a-Muzo double reed students are currently studying music.

She has played in many orchestras including the KZN PO, the Namibian National Symphony Orchestra, the FS Symphony, UCT Symphony and US Symphony, as well as Camerata Tinta Barocca and of course formerly as an ad hoc for the CPO. She is also a keen chamber musician, having had her own duo with guitarist UIiano Marchio, and was a member of the Cardea and Trio Argentum Ligno ensembles. She is currently a member of Intonga Reed Quintet which had a successful launch at Erin Hall in January 2019. She has played at, for instance, the Greyton Classic for All Festival and as soloist with the Winelands Orchestra, 4×2 Concert Series, Hugo Lambrechts Symphony Orchestra and Musicanti Chamber Orchestra.

Many of her students excel  in Royal Schools of Music and Trinity College London board exams, as well as in local competitions, and as she continues to teach privately so her students continue to benefit from her skills. She  also mentors oboists in the CPYO.

So why did she become a musician?  She had always dreamed of following in her father’s footsteps and becoming a lawyer but in her matric year she realized she had no choice.  It was music or nothing, and after hearing Gabriel’s oboe in The Mission in 1988, that was the instrument of choice.

“I am passionate about music because I love seeing how it enriches people’s lives and how it has opened doors for my students from disadvantaged communities. Seeing how it changes their lives is truly inspirational. I also love to see and hear how music can captivate an audience and free their minds (and mine!) in a fantastic musical journey. Creating beautiful musical moments with colleagues cannot be put in words.”

About being in the CPO, she says: “Making beautiful music with fantastic musicians and calling that my work – what a privilege! I feel like a kid before Christmas!