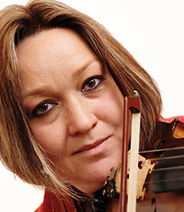 Guest concertmaster Farida Bacharova came to South Africa in 1995 from Russia, with her husband, violist and violin/viola maker Oleg Alekseev to join the CTSO. She had already graduated with distinction from the Gnesin Musical Pedagogical College and the Moscow State Tchaikovsky Conservatory, had at the age of 25 been one of the the youngest female concertmasters in Russia – with the ‘Maly’ Moscow Philharmonic Orchestra – and had performed with the USSR Ministry of Culture Symphony Orchestra, and the Moscow Academic Philharmonic Orchestra. She was a recitalist in the Chamber Hall, Rachmaninov Hall and White Hall in Moscow with internationally-acclaimed pianists. She has been on many international tours and performed working with conductors like Menuhin, Ashkenazy, Ozawa, Rozdestvensky, Mazur and Svetlanov.  Today she is an associate professor at UCT’s South African College of Music, as head of Strings and Orchestral Studies. She has played often as a soloist with orchestras in Cape Town, and regularly performs at festivals, also participating in a concert series at the Superior School of Music and Dance in Paris, last year. As a chamber musician, she has formed the Bacharova Quartet and also plays in the UCT Piano Trio with François du Toit and other ensembles.