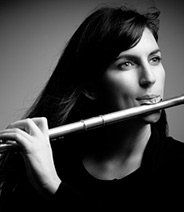 Gabriele von Durckheim, principal flute of the Cape Town Philharmonic Orchestra since inception,  received her first flute lessons from Eva Tamassy while still at primary school in Stellenbosch. After finishing her Higher Licentiate at the University of Stellenbosch, she continued her studies in England with renowned Flautist Trevor Wye. Gabriele has won several prizes and awards including Category prize of the ATKV Musiq competition and Oude Meester Music Competition, and is active as a flute teacher at the UCT College of Music, the German International School in Cape Town, and SACS. She has regularly performed as soloist and ensemble player, and has also been a member or several orchestras, including the Malaysian Philharmonic Orchestra and the South African National Youth Orchestra.