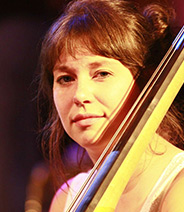 Born in Windhoek, double bass player Zanelle Britz moved to Bloemfontein in 1992 when she was six; her introduction to music came shortly after the family arrived in South Africa, with piano and recorder. At the age of 10, she had her first cello lesson with Tilla Henkins in Bloemfontein.  She was soon a member of the Trap der Jeug junior string orchestra, the first of four string orchestras at The Musicon in Bloemfontein,  from where she worked her way up to the Free State Youth Symphony Orchestra). She knew from the first day that this would be her life.  She also took flute lessons, and then the double bass lessons with Peter Guy, who ran a successful strings project in Mangaung.  She participated in several SA National Youth Orchestra courses as well as the Stellenbosch International Chamber festival as both cellist and double bassist.

In 2012, she was invited to the Swakopmunder Musikwoche in Namibia, an annual orchestral course for amateurs,  as double bass lecturer and has returned there each year. It was at the course that she met Alex Fokkens, double bass player and conductor, who suggested she study with him at the University of Cape Town. In 2014, she enrolled in a post graduate diploma in double bass performance at the South African College of Music, which she completed last year.

In 2014, she joined the Cape Town Philharmonic Orchestra as an ad-hoc, while continuing to play with orchestras in Windhoek, Bloemfontein, Port Elizabeth and Durban.

Zanelle auditioned for the post of tutti double bass player with the CPO and joined the orchestra in June, 2016.