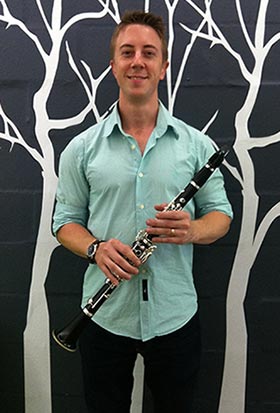 Daniel Prozesky, principal clarinet since 2015, is one of those multi-talented people – he’s an engineer and a musician. He started learning the clarinet when he was 12 and has graduated with degrees in both disciplines: Mechanical Engineering from the University of Pretoria in 2006 and music with distinction from the Haute Ecole de Musique de Lausanne (Lausanne Conservatory) in Switzerland in 2011.  He also studied for a Professional Diploma in Music at L’Institut de Ribaupierre in Lausanne under Frédéric Rapin. While there he performed with Namascae Ensemble, a prominent contemporary music ensemble in Switzerland and with the Conservatory’s orchestra.

He returned to South Africa in 2011, and has played as an ad hoc musician with the CPO, memorably and successfully stepping into the principal clarinet position on the day of the CPO Wagner-Strauss tribute with Met soprano Elsa van den Heever, a concert which was televised by KykNet.

He has had masterclasses with Rick Huls (Royal Netherlands Philharmonic) in Amsterdam, Charles Neidich in Apeldoorn, Holland, and with prominent European clarinettists in Switzerland.  He has performed Mozart and Weber concerti with the Johannesburg Philharmonic Orchestra and University of Pretoria SO and the orchestrated Poulenc Sonata with the Lausanne Conservatory Orchestra.  Daniel is also an ardent chamber musician, being a member of the MYOS Ensemble for clarinet, piano and cello, and giving performances at Aardklop, KKNK and Klein Karoo Klassique music festivals. He has had several compositions dedicated to him.

He has been a part-time clarinet teacher at several schools in Pretoria and Cape Town, and spends spare hours riding motor cycles and climbing mountains. Daniel has worked as an engineer in crash safety at Ford Motor Company and most recently in product design for an LED lighting company. Daniel is married to principal horn Caroline Prozesky.