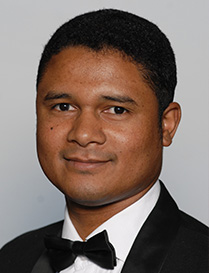 Paul Chandler is in a good place – he combines all facets of his life from his wife, 2 children and 4 dogs to his teaching and playing. Paul’s career has grown and expanded, thanks to orchestral opportunities. He started his career as a cadet in the CTSO when he was about 20 and studying. When the CTSO and CTPO merged in 1997, there were four trumpeters and no need for extra musicians. So, having graduated from UCT with an honours in Music (he later studied for his masters), he began to freelance in Durban, Johannesburg and Windhoek.   Much as he loved freelancing and teaching, the chance of a position in the newly formed CPO in 2000 was appealing, and he auditioned for and won a position.

A few years later, in 2004, when the CPYO was formed, he saw the need for a wind band to accommodate all those extra wind musicians who wouldn’t have been able to join the CPYO and so, under the direction of Henriette Weber as outreach manager, he became the first conductor of the CPY WE. He did this for about five years, until his growing family required his presence over the weekends, and he reluctantly relinquished his WE work. All the time, though, he continued with his teaching, for he is passionate about passing on his skills to others. He teaches now at Pinelands High, but has taught at many other schools from Bishops and Western Province Prep to SACs and to Beau Soleil where he taught for 10 years.